Recently, about 94,505 BTC, an equivalent of more than $1 billion was transferred from fifteen BTC wallets to a single receiving address. This transfer makes the receiving address the richest non-exchange BTC wallet till date. There have been speculations as to where the flood of BTC originated from and why such a large transaction took place. However, as all suggestions remain uncertain, analysis has confirmed that a third of the total transferred BTC originated from Huobi.

Huobi Might Have Housed Thousands Of BTC From PlusToken Ponzi

In August, the results of the analysis revealed that some of the proceeds of a notorious Ponzi scheme, PlusToken were sent to Huobi. Huobi is a well-known cryptocurrency exchange based in Singapore. According to the report, PlusToken, a popular cryptocurrency wallet provider pulled off an exit scam in mid-June, a time when withdrawals began to prove difficult for its wallet holders. At the time of the exit scam, the wallet provider had cited technical issues as reasons for customers’ inability to withdraw their funds from their wallets, eventually making away with about $3 billion worth of crypto deposits.

According to a seemingly feasible analysis from popular crypto analyst going by the name TokenAnalyst on Twitter, about one-third of the 94K+ BTC involved in the controversial BTC transfer directly “originates from Huobi.”

In August, another analysis conducted by Elements, a renowned blockchain analytics firm, revealed that majority (about 50%) of all Ethereum transactions originating from PlusTokens were sent to Huobi. According to the report,

“Almost 50% of all withdrawals were sent to Huobi, indicating an unusually strong bias toward the Chinese exchange.”

The large crypto exchange seems to understand the implications of being related to such a controversial transfer of BTC. In a swift response to the allegations, a spokesman of the exchange expressed that it was investigating the issue.

Meanwhile, the community keeps putting forward ideas and possible instances relating to the recent controversial BTC transaction. One of the most popular conjecture is that the transaction took place owing to the Bakkt warehouse launch. A twitter user, @MusaShamaev, replied to WhaleAlert’s tweet about the transfer with the words “Deposit for BAKKT wallet.” Several other users echoed the same sentiments. 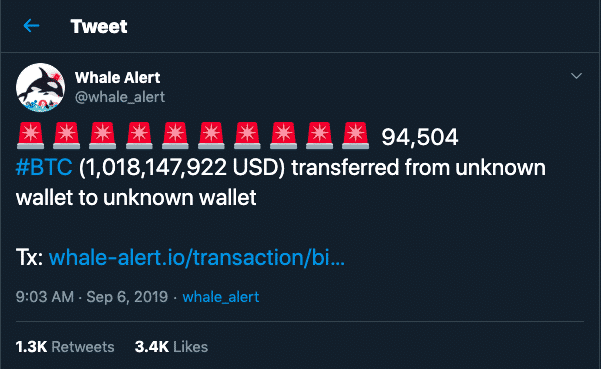 Article Name
The Big $1 Bn BTC Transfer Update: A Third of the BTC May Have Come from this Exchange
Description
Recently, about 94,505 BTC, an equivalent of more than $1 billion was transferred from fifteen BTC wallets to a single receiving address. This transfer makes the receiving address the richest non-exchange BTC wallet till date.
Dare Shonubi
Publisher Name
Publisher Logo

Staff writer at Coingape. Certified cryptocurrency expert and Blockchain journalist covering crypto market analysis and general Blockchain adoption and development.
You can follow me on Twitter at @ShonubiDare or reach out to me at dare[at]coingape.com